The channel sampling has shown that the gold values are not confined to small areas within the veins but occur over significant strike lengths along the veins. The absence of gold in a small drill core intersection does not diminish the gold endowment of the greater vein system. The table below shows the highlights of the channel sampling.

Table 1: Highlights of channel sampling on the Rivard property.

William Paterson, Trillium Gold’s Vice President of Exploration and former Exploration Superintendent for Goldcorp’s Red Lake Gold Mines added, “Understanding both the controls and the geometry of the high-grade mineralization seen on surface and intersected in drilling on Rivard is vitally important to the expansion of the overall system. We have shown that this vein system is influenced by the east-west structures evident in the NT Zone and our work gives us information on how to explore for and increase our success in delineating the high-grade shoots.” The program of outcrop washing and channel sampling focused on the Rivard (RV) veins in areas of shallow cover. The areas were chosen from reconnaissance mapping with potential for expanding our understanding of the association of the gold grades and structures, such as veining and sheared vein sections identified from mapping and core logging. Other areas were chosen from unsampled, but previously identified known gold occurrences, such as the VG1 and VG2 areas known to have visible gold (VG) at surface.

Once cleaned off, the outcrops were mapped and the information transferred to high-resolution geo-referenced photos taken by drone. Channel samples were marked out and cut using a rock-saw.

These areas both showed a correlation of elevated assay results in cross-cutting RV-style veining and east-west trending veining. In addition, both areas increase our understanding of the attitude of the contacts and geometries of the NT Zone, including the embayed/fault contact on the west side of the Rusty Can area, and offsets along east-west and Azi 140° trending shears.

The highest-grade portions of the veins (specifically in the VG1, VG2 and RV21-34 outcrops) show an association of the RV-style veining and narrow east-west sheared sections (see Figures 2 and 3). The conclusion drawn is that the higher gold assays are broadly associated with areas of intersection between the RV-style veining and the east-west structures, as pipe-like trends.

It has also been noted, in the mapping of the VG1, 2, & RV21-34 areas, that the veining trends associated with the higher-grade assays are slightly rotated (110° to <135° Azi relative to the regional RV-style vein orientation of ~140° Azi) in areas nearest the narrow east-west shears. Reviewing the drilling data with the revised plunge/pipe trends will assist in refining our interpretation of the higher-grade mineralization in the greater project area. 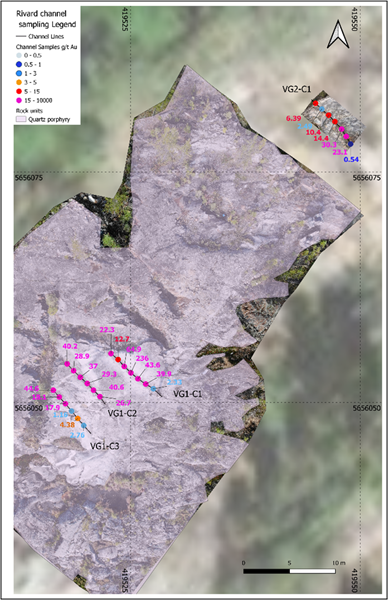 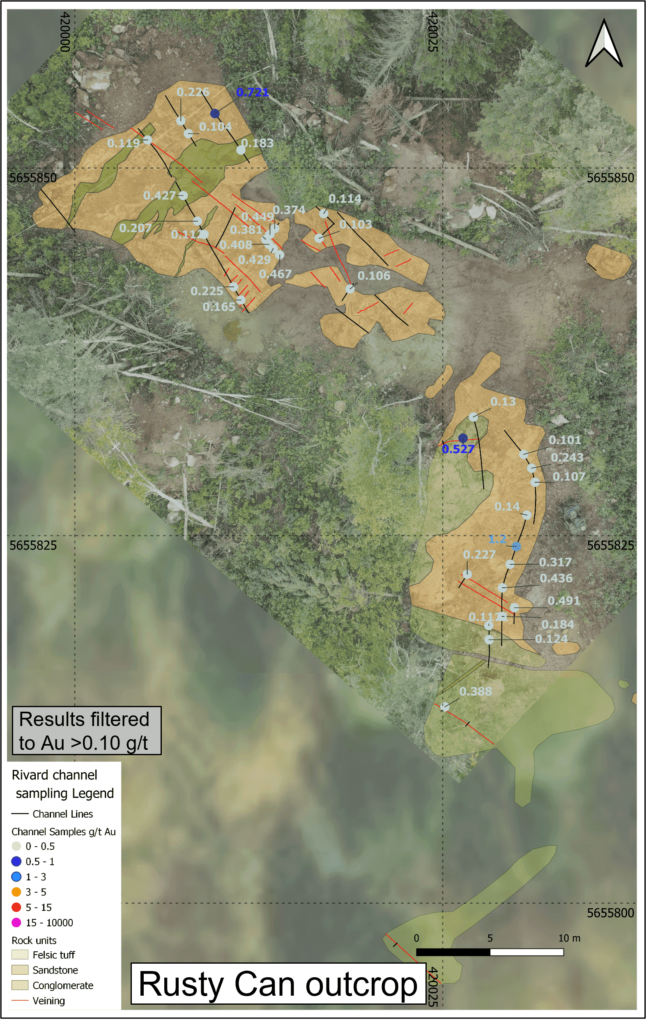 All the areas mapped and sampled have increased the understanding of the Rivard property through the lithology, vein, and structural features seen and measured, and will assist in refining future exploration and mineralization models of the property.

Trillium Gold Mines Inc. is a growth focused company engaged in the business of acquisition, exploration and development of mineral properties located in the Red Lake Mining District of Northern Ontario. As part of its regional-scale consolidation strategy, the Company has assembled the largest prospective land package in and around the Red Lake mining district in proximity to major mines and deposits, as well as the Confederation Lake and Birch-Uchi greenstone belts. Recent examples are the acquisition of the Willis property southwest of and contiguous to the Newman Todd complex, and a definitive agreement giving the Company control over a significant portion of the Confederation Lake Greenstone Belt to more than 100 km in length. In addition, the Company has interests in highly prospective properties in Larder Lake, Ontario.

This news release contains forward-looking information, which involves known and unknown risks, uncertainties and other factors that may cause actual events to differ materially from current expectations.

Forward-looking information is based on management’s reasonable assumptions, estimates, expectations, analyses and opinions, which are based on management’s experience and perception of trends, current conditions and expected developments, and other factors that management believes are relevant and reasonable in the circumstances, but which may prove to be incorrect.   Such factors, among others, include: impacts arising from the global disruption caused by the Covid-19 coronavirus outbreak, business integration risks; fluctuations in general macroeconomic conditions; fluctuations in securities markets; fluctuations in spot and forward prices of gold or certain other commodities; change in national and local government, legislation, taxation, controls, regulations and political or economic developments; risks and hazards associated with the business of mineral exploration, development and mining (including environmental hazards, industrial accidents); inability to obtain adequate insurance to cover risks and hazards; the presence of laws and regulations that may impose restrictions on mining; employee relations; relationships with and claims by local communities and indigenous populations; availability of increasing costs associated with mining inputs and labour; the speculative nature of mineral exploration and development (including the risks of obtaining necessary licenses, permits and approvals from government authorities); and title to properties.

Readers are cautioned not to place undue reliance on these forward-looking statements, which speak only as of the date of this press release. The Company disclaims any intention or obligation, except to the extent required by law, to update or revise any forward-looking statements, whether as a result of new information, future events or otherwise.