Highlights of this hole are listed in Table 1 below and can be viewed on section in Figure 2.

As was evident in NT20-169, the high-grade mineralization (9m @ 19.73 g/t Au from 135m) occurs near the footwall contact of the NT Zone and underlying felsic volcanic rocks. This intercept encompasses fuchsite-altered felsic tuffs and well mineralized silica-sulphide breccias with the strongest gold mineralization associated with traces of galena and sphalerite. As seen throughout the NT Zone, Rivard-style quartz veins are also present in the mineralized zone.

The azimuth of the drilling and the location of this intercept being slightly north and above that in NT20-169, indicates that this high-grade mineralization encompasses significant width and size in the footwall area. Modelling of the mineralization shows that this is another significant East-West structurally controlled body, now named the Camp Fault, as suggested in the aforenoted news release, of high-grade gold mineralization hosted within the NT Zone.

Other significant grade and width intercepts reveal the possibility of additional unidentified East-West structures, including 4m @ 11.22 g/t Au from 36 metres down-hole, revealing a new zone near the collar confirming our structural model for the deposit. Again, this intercept occurs in a silica-sulphide breccia with a pair of 4-5cm Rivard-style quartz veins.

Russell Starr, President and CEO of Trillium Gold commented, "We are at a very exciting juncture in our drilling at Newman Todd that we believe going forward will considerably impact our ability to target multiple East-West structural corridors controlling the high-grade zones of mineralization.  With our new-found understanding of the structural controls and a completely different orientation in drilling, we can now make sense of the random high-grade intercepts that historical drilling encountered, with greater potential to create coherent high-grade gold zones controlled by these structures." 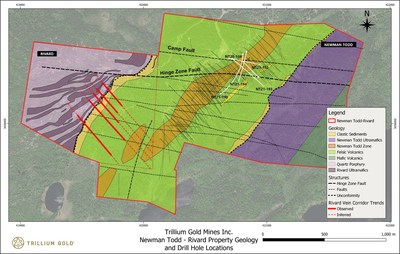 William Paterson, Trillium Gold’s VP of Exploration and former Exploration Superintendent for Goldcorp’s Red Lake Gold Mines added, "This is further confirmation that not only is there a strong correlation between high-grade mineralization and the East-West structures, but that the highest grades are also associated with Rivard-style quartz veining within the brecciated NT Zone. These mineralized zones also have significant widths that are expected to favourably impact the overall NT Zone resource and contribute to a potential underground scenario. Our focus moving forward will be to expand on these known East-West high-grade zones and to test others where early indications point to structurally controlled high-grade mineralization." Subsequent to the news release on September 8, 2021, some assay results for NT21-193 have been corrected for very minor values. The updated list is included below.

All drilling was supervised by Paul Barc, PGeo. The drilling was conducted by Rodren Drilling Ltd., of West St. Paul, Manitoba. Drill core was logged and sampled in a secure core facility on site. Core samples from the program were cut in half, using a diamond cutting saw, and half cores were sent for analysis to the SGS Laboratory in Burnaby, BC and Activation Laboratories Ltd. in Dryden and Thunder Bay, ON, all accredited mineral analysis laboratories. All samples were analysed for gold using standard Fire Assay-AA techniques. Samples returning over 10.0 g/t gold were analyzed utilizing standard Fire Assay-Gravimetric methods. Any samples with results greater than one ounce per ton gold were also analyzed with a standard 1 kg metallic screen fire assay. Certified gold reference standards, blanks and duplicates are routinely inserted into the sample stream, as part of Trillium Gold’s quality control/quality assurance program (QAQC) to monitor accuracy and precision. No QAQC issues were noted with the results reported herein. All drill intercepts reported are down-hole core lengths, which do not necessarily represent true widths.

Trillium Gold Mines Inc. is a growth focused company engaged in the business of acquisition, exploration and development of mineral properties located in the Red Lake Mining District of Northern Ontario. As part of its regional-scale consolidation strategy, the Company has assembled the largest prospective land package in and around the Red Lake mining district in proximity to major mines and deposits, as well as the Confederation Lake and Birch-Uchi greenstone belts.  Recent examples are the acquisition of the Willis property southwest of and contiguous to the Newman Todd complex, and a non-binding LOI giving the Company control over a significant portion of the Confederation Lake Greenstone Belt to more than 100 km in length.  In addition, the Company has interests in highly prospective properties in Larder Lake, Ontario and the Matagami and Chibougamou areas of Quebec.

This news release contains forward-looking information, which involves known and unknown risks, uncertainties and other factors that may cause actual events to differ materially from current expectation. Readers are cautioned not to place undue reliance on these forward-looking statements, which speak only as of the date of this press release. The Company disclaims any intention or obligation, except to the extent required by law, to update or revise any forward-looking statements, whether as a result of new information, future events or otherwise.