VANCOUVER, BC, Sept. 8, 2021 /CNW/ – Trillium Gold Mines Inc. (TSXV: TGM) (OTCQX: TGLDF) (FRA:0702) (“Trillium Gold” or the “Company”) reports that the majority of assays from drilling completed up to mid-July have been received with assay reporting taking well over two months. Samples representing 6,708 metres in 15 drillholes (NT21-185 to 193 and RV21-31 to 36; Figure 1) have been processed and summarized below. Results remain pending for only three Newman Todd and Rivard drill holes and all assays at Gold Centre remain pending. The total 2021 drilling program now stands at 12,385 metres in 26 drillholes on the combined Newman Todd and Rivard Projects. It is now clear that gold mineralization in the Newman Todd Complex is more widespread than historically interpreted, and the mineralizing system is considerably larger and more integrated than previously contemplated.

Historically, the Rivard and Newman Todd properties were explored in isolation and were not systematically drilled for an integrated structural understanding. The Rivard property (which Trillium Gold acquired late in 2020) has allowed Trillium to substantially advance the understanding of the structure, geology and mineralization of the larger Newman Todd complex with significant up-side potential now being seen both in terms of ounces and higher grades.

Figure 1 shows an updated structural and lithological interpretation of the property with higher-grade composite intervals and priority exploration areas. The most significant drilling intercepts are encapsulated in Table 1 on page 5 of this press release.

Russell Starr, President and CEO of Trillium Gold commented, “This represents a major break-through in our interpretation of the structural controls governing mineralization at Newman Todd.  We believe with further drilling we will delineate a much larger and higher-grade resource from the Newman Todd complex than was previously thought possible. With this new understanding that the Newman Todd area is much more gold-endowed and the mineralizing system much larger and more integrated than previous operators had envisioned, further exploration will be focused on several high priority targets.”

William Paterson, Trillium Gold’s VP of Exploration and former Exploration Superintendent for Goldcorp’s Red Lake Gold Mines added, “Trillium’s geologists have made huge strides in understanding the gold system at Newman Todd. It should now be possible to more precisely model coherent high-grade portions of the mineralization and effectively target other structurally controlled high-grade repetitions throughout the length of the Newman Todd Zone (NT Zone). Defining the framework controlling the high-grade gold mineralization, to being able to look at the larger property package holistically, has shown that this area is much more endowed with gold than previously maintained. With greatly enhanced prospectivity, the complex has many more high-quality priority exploration targets, and we see this as significant upside for the global resource.”

Detailed targeted drilling (NT21-185 to -189) was completed in the Hinge Zone area of the NT Zone and was designed to improve the understanding of the structural controls of the high-grade intercepts seen throughout the drilling programs (Figure 2). This work, combined with concurrent detailed studies elsewhere on the NT Zone has yielded a much clearer picture of the continuity of the higher-grade intercepts and potentially a significant increase in the higher-grade portion of the resource. This detailed work has also shown that the NT Zone is not a single brecciated body, but is in fact a succession of brecciated units, with some sections dislocated by a series of east-west structures. Between the breccia units, felsic volcanic rocks have been observed in core indicating potentially considerable strain related deformation in the NT Zone, and by inference, across the property. It is also noted that while the Hinge Zone Fault is a major and readily identifiable structure, others are more subtle and require careful core observation to identify.

As anticipated, a number of significant high-grade intercepts were obtained as well as wide (up to 52m core length) zones of mineralization and visible gold.

Further drilling at the southwest extension of the NT Zone has only just begun with a significant result in a quartz vein containing visible gold of 0.3m @ 67.0 g/t Au obtained from RV21-35. Analysis of the recent high-definition helicopter-borne magnetic survey over the property suggests that there is a roughly north-south dislocation of the NT Zone with the west side moved northward thereby creating the second NT Zone feature intersected in the drilling.

Drilling on the Rivard property (RV21-31 to 34) focused on proving the lateral and depth continuity of gold mineralization within the southeast-trending high-grade veins, historically trenched on surface, and confirmed and expanded on historical drilling results. While the numerous high-grade veins cannot be individually modelled, it has been determined that there are discrete corridors where the vein densities are greater, which generally correspond to the major excavations on surface. Recent results from these holes include narrow intercepts ranging up to 116.0 g/t Au with RV21-34 containing a wider zone of 2.2m @ 25.23 g/t Au. There were many logged occurrences of visible gold in these holes. Gold mineralization has been obtained in these corridors along roughly 300m of strike length and down to approximately 300m below surface.

Further analysis of all results on the Rivard property also shows that the NNE-trending unconformity, with the ultramafic and porphyry rocks to the west, also plays a role in focusing gold mineralization with a large number of significant results in close proximity to this unconformity.

With the new understanding that the Newman Todd area is much more gold-endowed and the mineralizing system much larger and more integrated than previous operators had envisioned, further exploration will be focused on several high priority targets (see Figure 1 for locations) based on results, observations, and modeling to date, namely:

A.  Drilling in the NT Zone to locate and expand high-grade mineralization controlled by the east-west structures and confirming the Rivard-style gold veins thereby expanding and enhancing the current resource.

B.  Drilling in the southwest extension area to test mineralization related to the east-west structures, the north-trending dislocation structure and the vein corridors trending from the northwest on the Rivard property.

C.  Drilling to test along the NNE-trending unconformity on Rivard targeting the vein corridor and east-west structural intersections, including the western extension of the Hinge Zone Fault where it has created a jog in the unconformity.

D.  Grassroots exploration and drilling east of the NT Zone to test the ultramafic contact where the east extension of the Hinge Zone Fault and other east-west structures intersect it.

* Note:  Drillholes NT21-191 and RV21-36 were stopped before reaching any significant depth.

Trillium has resumed exploration at Gold Centre and is currently drilling the third of eight planned holes (~8,000 metres). All assay results remain pending from drilling completed to date.

All drilling was supervised by Paul Barc, PGeo. The drilling was conducted by Rodren Drilling Ltd., of West St. Paul, Manitoba. Drill core was logged and sampled in a secure core facility on site. Core samples from the program were cut in half, using a diamond cutting saw, and half cores were sent for analysis to the SGS Laboratory in Burnaby, BC and Activation Laboratories Ltd. in Dryden and Thunder Bay, ON, all accredited mineral analysis laboratories. All samples were analysed for gold using standard Fire Assay-AA techniques. Samples returning over 10.0 g/t gold were analyzed utilizing standard Fire Assay-Gravimetric methods. Any samples with results greater than one ounce per ton gold were also analyzed with a standard 1 kg metallic screen fire assay. Certified gold reference standards, blanks and duplicates are routinely inserted into the sample stream, as part of Trillium Gold’s quality control/quality assurance program (QAQC) to monitor accuracy and precision. No QAQC issues were noted with the results reported herein. All drill intercepts reported are down-hole core lengths, which do not necessarily represent true widths.

On behalf of the Board of Directors,
Trillium Gold Mines Inc.
Russell Starr
President, CEO and Director

Trillium Gold Mines Inc. is a growth focused company engaged in the business of acquisition, exploration and development of mineral properties located in the Red Lake Mining District of Northern Ontario. As part of its regional-scale consolidation strategy, the Company has assembled the largest prospective land package in and around the Red Lake mining district in proximity to major mines and deposits, as well as the Confederation Lake and Birch-Uchi greenstone belts.  Recent examples are the acquisition of the Willis property southwest of and contiguous to the Newman Todd complex, and a non-binding LOI giving the Company control over a significant portion of the Confederation Lake Greenstone Belt to more than 100 km in length.  In addition, the Company has interests in highly prospective properties in Larder Lake, Ontario and the Matagami and Chibougamou areas of Quebec.

This news release contains forward-looking information, which involves known and unknown risks, uncertainties and other factors that may cause actual events to differ materially from current expectation. Readers are cautioned not to place undue reliance on these forward-looking statements, which speak only as of the date of this press release. The Company disclaims any intention or obligation, except to the extent required by law, to update or revise any forward-looking statements, whether as a result of new information, future events or otherwise. 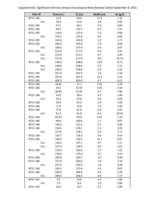