VANCOUVER, BC, Jan. 11, 2022 /CNW/ – Trillium Gold Mines Inc. (TSXV: TGM) (OTCQX: TGLDF) (FRA: 0702) ("Trillium Gold" or the "Company") is pleased to report findings from the spaciotemporal geochemical hydrocarbon (SGH) sampling program completed during the summer on the Company’s Confederation Belt properties. The 39,300 hectare contiguous land position lies directly on trend with important discoveries currently unfolding in the Red Lake Mining District and represents one of the largest and most prospective land packages assembled. Concurrent with the program, prospecting and sampling was carried out over the property which results are still pending.

Independent results and interpretations provided by Activation Laboratories Ltd. ("Actlabs"), from the 17 SGH regional soil sampling grids (Figure 1), identified numerous gold pathfinder anomalies (with rating categories ranging from 1-6), establishing the gold exploration potential of the Company’s properties. These encouraging anomalies will serve as priority targets for Trillium Gold’s second phase of exploration work in the 2022 field season and, together with the sampling and prospecting program carried out concurrently, are expected to generate multiple drill targets.

William Paterson, Trillium Gold’s VP of Exploration added, "The newly identified relationships among SGH-generated gold targets, historical gold assays and possible structural and lithological controls, effectively launch Trillium Gold’s Confederation belt properties into a new era in gold exploration. Based on the interpretation to date of the SGH reports, it appears that multiple styles or generations of processes are potentially responsible for the anomalies, and, therefore, more than one target type for gold exploration on these properties."

Russell Starr, President and CEO of Trillium Gold commented, "Our strategy to consolidate the greenstone belt over the last year has positioned Trillium Gold as the most dominant exploration company in the Red Lake Mining District today. Several of Trillium’s contiguous claim blocks share the same stratigraphy with that of the Dixie LP Fault and extend eastward along the Birch-Uchi belt where other important discoveries are unfolding.

Many of these former VMS-rich districts have proved to be well endowed for gold, and with Red Lake having already produced 29 million ounces of high-grade gold1 with infrastructure, mills and roads, we believe we are at the nexus of this rapidly developing gold camp."

The three smaller grids in the southwest of the Joy Block were designed as orientation surveys over known base metal and minor gold mineralization intersected in historical drilling. A large portion of the Joy-Copperlode Blocks are covered by variably conductive outwash and deglaciation sediments (not locally derived) and despite no outcrop identified in these areas, all three returned anomalies, the western-most two confirming the method over known drill hole results.

Based on a synthesis of previous work reviewed to date by Company geologists, these anomalies appear likely spatially associated with more than one type of control (i.e., late-stage structural, lithological, as well as possible earlier structures (syn-volcanic?), as previously interpreted in historical work). The location of the anomalies is directly on trend with regional-scale faults (as at Great Bear’s Dixie Project) and provide a new framework on which to focus gold exploration in the belt and region. 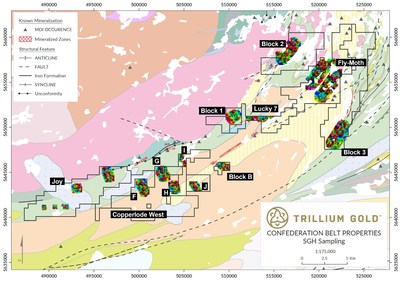 On the Copperlode West block, the F-anomaly is a highly-rated anomaly cut by a NW-SE trending magnetic lineament (possibly D2 orientation?) and represents one of the more encouraging targets in the area. Also of high-rating is the I–anomaly which lies on the western extension of an EM conductor in an area with no known historical geological, geochemical or geophysical surveys. The J-anomaly was identified as a potential Redox zone by Actlabs, similar to that at the Dixie Hinge and Limb zones sampled by Great Bear Resources (news release August 1, 2019).

The Block 1 anomalies lie within stratigraphy representing the eastern extension of that hosting the copper-molybdenum mineralization near Fredart Lake. The two geochemical signatures appear to be on strike from one another, hosted by iron formation or ferruginous sediments. There has been very little historical work in this area. The Lucky 7 anomaly lies within an EM conductor trend that has been drilled, off-property, intersecting gold values up to 4 g/t over 1.5ft. Grab samples in the drilled area also ran up to 13 g/t gold.

The Block 2 anomaly, among the highest rated by Actlabs, shows a significant number of high contrast peaks over a large, 600m x 450m area. Actlabs identify it as a segmented nested-halo anomaly coincident to that of the Redox zone. The potential for gold mineralization here is believed to possibly exist directly below this anomaly.

The Fly-Moth N and S grids serve as extensions to exploration work on known prospective and mineralized trends associated with the past-producing South Bay Mine. There are anomalous gold values in historical lithogeochemical samples in the general area around the mine; however, samples further towards the southwest were not assayed for gold. The SGH grids fill in the data gaps and successfully highlight new gold anomalies. These anomalies are highly rated and show characteristics of Redox Zones as well.

Here, the controls on processes responsible for the development of these anomalies likely reflect a complex interplay between lithology and structure. There appears to be some, but not exclusive, spatial lithological control locally (e.g., near Triangle Lake) as the anomalies are associated with minor intrusive rocks which themselves were previously interpreted as fault controlled. However, one anomaly coincides directly with a previously mapped rhyolite tuff unit suggesting the possibility of lithologically hosted gold.

Equally, the geometry of elevated gold in this package of rocks could be suggestive of syn-volcanic fault-controlled mineralization. At the southern edge of Triangle Lake, historical work identified anomalous gold that coincides with a previously mapped fault. These types of relationships bear investigating for refinement or confirmation of ideas with follow-up exploration work planned for 2022.

The Block 3 anomaly coincides with several important features: a regional-scale fault trace, a major volcanic break (cf. Thurston et al, 1980), and a property scale transition from felsic to mafic volcanic rocks. Historical work on the property identified several sulphide zones and/or geophysical conductors. The few historical drill holes in the general area, inconsistently sampled for base metals and even more infrequently for precious metals, do show elevated copper, zinc and gold in these sulphide horizons.

Conversely, in the direct vicinity of the anomaly, virtually no geochemical work has been performed, and there are only two known drill holes, the locations of which remain uncertain. 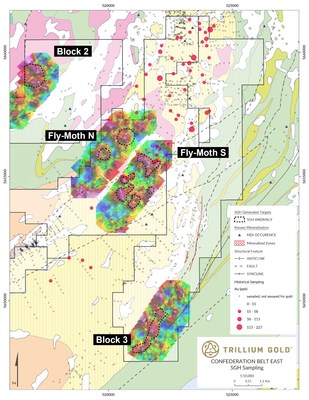 The technical information presented in this news release has been reviewed and approved by William Paterson QP, PGeo, VP of Exploration of Trillium Gold Mines, as defined by NI 43-101.

Trillium Gold Mines Inc. is a growth focused company engaged in the business of acquisition, exploration and development of mineral properties located in the Red Lake Mining District of Northern Ontario. As part of its regional-scale consolidation strategy, the Company has assembled the largest prospective land package in and around the Red Lake mining district in proximity to major mines and deposits, as well as the Confederation Lake and Birch-Uchi greenstone belts.  Recent examples are the acquisition of the Willis property southwest of and contiguous to the Newman Todd complex, and a definitive agreement giving the Company control over a significant portion of the Confederation Lake Greenstone Belt to more than 100 km in length.  In addition, the Company has interests in highly prospective properties in Larder Lake, Ontario and the Matagami and Chibougamou areas of Quebec.

This news release contains forward-looking information, which involves known and unknown risks, uncertainties and other factors that may cause actual events to differ materially from current expectations.

Forward-looking information is based on management’s reasonable assumptions, estimates, expectations, analyses and opinions, which are based on management’s experience and perception of trends, current conditions and expected developments, and other factors that management believes are relevant and reasonable in the circumstances, but which may prove to be incorrect.  Such factors, among others, include: impacts arising from the global disruption caused by the Covid-19 coronavirus outbreak, business integration risks; fluctuations in general macroeconomic conditions; fluctuations in securities markets; fluctuations in spot and forward prices of gold or certain other commodities; change in national and local government, legislation, taxation, controls, regulations and political or economic developments; risks and hazards associated with the business of mineral exploration, development and mining (including environmental hazards, industrial accidents); inability to obtain adequate insurance to cover risks and hazards; the presence of laws and regulations that may impose restrictions on mining; employee relations; relationships with and claims by local communities and indigenous populations; availability of increasing costs associated with mining inputs and labour; the speculative nature of mineral exploration and development (including the risks of obtaining necessary licenses, permits and approvals from government authorities); and title to properties.

Readers are cautioned not to place undue reliance on these forward-looking statements, which speak only as of the date of this press release. The Company disclaims any intention or obligation, except to the extent required by law, to update or revise any forward-looking statements, whether as a result of new information, future events or otherwise.